Pelosi Opens ANOTHER Investigation into Trump, this time over COVID-19, Trump Responds

There was never any doubt that Democrats would weaponize the coronavirus outbreak for political means and it could serve as the impetus for another shot at impeachment.

Pelosi let the cat out of the bag during an appearance on CNN’s “State Of The Union” with Jake Tapper on Sunday morning by hinting that once the crisis has begun to subside, that there would be another investigation into President Trump.

Pelosi accused President Trump directly of costing American lives through his constant denials and delays in response to the coronavirus outbreak.

“The president’s denial at the beginning was deadly,” the House speaker told CNN’s State of the Union. “His delay in getting equipment to where it’s needed is deadly … As the president fiddles, people are dying.”

About 2,200 Covid-19 deaths had been confirmed in the US by Sunday morning, among about 125,000 confirmed cases, the most in any country.

Asked if she was saying Trump’s early downplaying of the severity of the crisis had “cost American lives”, Pelosi replied: “Yes, I am. I’m saying that.” 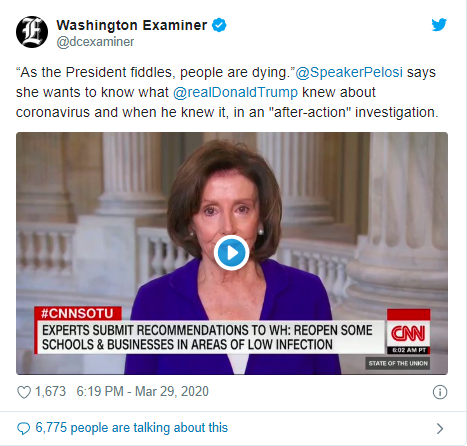 President Trump warned against the political “witch hunts” being used after Pelosi created the bipartisan House Select Committee to track the federal response to the coronavirus outbreak.

The committee, which will be chaired by Democratic Whip Jim Clyburn, D-S.C., will have the power to issue subpoenas. The panel will focus on accountability, transparency, and oversight of the federal coronavirus response, hoping to also include supervision to the $2 trillion stimulus package.

Trump did not name Pelosi or the new committee specifically during a White House press briefing on Thursday, but the rhetoric echoed past complaints about other accountability measures, including former special counsel Robert Mueller’s Russia investigation and the House impeachment proceedings, which he demeaned as “scams,” “witch hunts” and “hoaxes.”

Speaking of the virus, Trump said: “It’s time to get this enemy defeated. Conducting these partisan investigations during a pandemic is a really big waste of vital resources, time, attention. And we want to fight for American lives, not waste time and build up my poll numbers, because that’s all they’re doing, because everyone knows it’s ridiculous.” 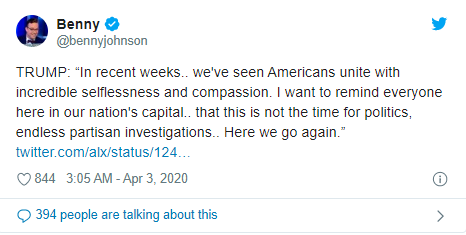 Trump echoed those remarks in a harshly worded letter to Senate Minority Leader Chuck Schumer, D-N.Y., on Thursday. Trump was responding to what he called Schumer’s “Democrat public relations letter and incorrect sound bites, which are wrong in every way” concerning the federal coronavirus response.

“If you spent less time on your ridiculous impeachment hoax, which went haplessly on forever and ended up going nowhere (except increasing my poll numbers), and instead focused on helping the people of New York, then New York would not have been so completely unprepared for the ‘invisible enemy,’” Trump wrote.

The president added: “I’ve known you for many years, but I never knew how bad a Senator you are for the state of New York, until I became president.”

Trump further asserted that Rep. Alexandria Ocasio-Cortez would “likely” defeat Schumer in a primary if she chose to run.

During a phone call with reporters Thursday, Pelosi said she hopes the committee will be bipartisan and said of the White House: “We hope there would be cooperation. This is not an investigation of the administration. Things are just so new and the rest, and we want to make sure there aren’t exploiters out there… where there’s money, there is also frequently mischief.”

House Minority Leader Kevin McCarthy, R., Calif., said he opposed the creation of a new committee, saying, “Inside the bills that we passed, we did put in oversight and this seems really redundant.”

The $2 trillion package Trump signed, the largest economic rescue bill in U.S. history, provides cash payments to Americans, loans to businesses and financial relief for industries. The goal is to inject cash into an economy ravaged by shutdowns brought about by the spread of coronavirus.

Powered by WordPress | Designed by TieLabs
© Copyright 2023, All Rights Reserved