Melania Not Invited to First Lady Summit at Camp David

Even though she boasts a long list of shining accomplishments including her anti-bullying “BeBest” initiative, her work with homeless pets for the Greater Florida Poodle Shelters, and her partnership with musician Zamfir to raise awareness of the health benefits of the pan flute, first lady Melania Trump still never seems to command the respect she deserves.  Whether it be the lamestream media sidelining her as an “aging trophy wife” or harsh critics in the political community painting her as an in-over-her-head gold digger, it’s as if the equine-visaged former blumpkin saleswoman can’t catch a break.

This month, in yet another public slight, Mrs. Trump was specifically disinvited to the historic “First Lady Summit”, to be held at Camp David, the iconic presidential retreat.  The Summit is a high-profile event to be streamed over the internet to millions worldwide, with a keynote speech by Hillary Clinton, possibly the most accomplished holder of the position in all of history.

Event organizer Sandy Batt says every single attendee had a specific objection to First Lady Trump’s attendance, making her presence an impossibility.  Batt made public some statements to that effect from the guests themselves :

“There’s only going to be three or four cameramen there.  I’m fairly sure we can do without a hooker for them for a single weekend.” – Rosalyn Carter

“I’ve heard she speaks six languages or something.  We’ll give her a call if we need something translated into Blowjobbian or Handjobese.” – Laura Bush

“I’ll send her a copy of my speech so she can plagiarize it and hang it on her fridge for her mutant family.” – Michelle Obama

“We don’t need someone walking around trying to figure out how to work doorknobs for the first time.  Plus, I don’t think there’s room to install her feeding trough.” – Ghost of Nancy Reagan

“I’m only going to up my standing against Keith Richards in the Celebrity Death Pools.” – Barbara Bush

Clinton herself refused to toss any obvious barbs at the Slovenian Cruella DeVille, responding with her trademark Hillary cackle-laugh and the universal mime-gesture of penis-jerking traditionally denoting indifference. 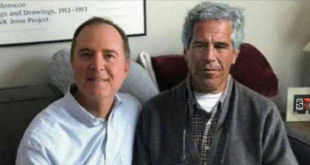 It’s no secret that Epstein and Schiff share a long history of perversion. Last year, …