NEW YORK — Former CNBC anchor Michelle Caruso-Cabrera previously announced that she will run against U.S. Rep. Alexandria Ocasio-Cortez, joining a dozen other candidates who have announced plans to challenge the high-profile freshman from New York City.

Caruso-Cabrera told CNBC that she will run against Ocasio-Cortez in the Democratic primary for the seat that includes parts of the Bronx and Queens. 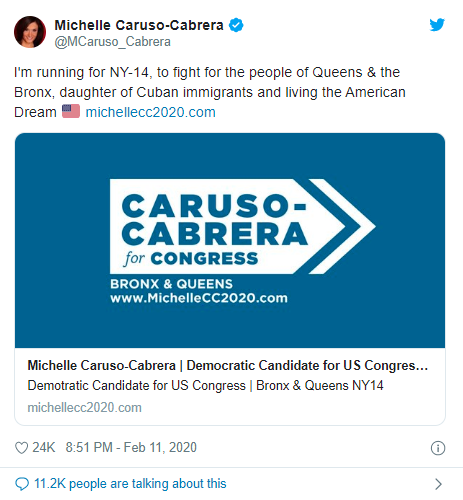 Caruso-Cabrera has already raised $1 million in her bid to defeat Ocasio-Cortez in the June 23 Democratic primary, her campaign said Wednesday.

Caruso-Cabrera, the former veteran CNBC anchor, will report having $800,00 in cash on hand — minus expenses paid — when she officially files her financial disclosures with the Federal Elections Commission.

“The outpouring of support has been amazing. Before Coronavirus people were stopping me on the street showing their excitement. And from the beginning the countless handwritten letters from near and far s from across the country have been so moving,” said Caruso-Cabrera said.

“The national and local messages are clear: I will unite. AOC’s reign of division will end. This early financial and political support shows unstoppable momentum. As they say in New York, ‘you ain’t seen nothing yet.’ “

A democrat herself, Caruso-Cabrera still falls considerably to the right of Ocasio-Cortez politically, believing in small government and fiscal conservatism.

In fact, she has been an outspoken opponent of big government in her more than 20 years as an anchor, international correspondent, and author of the book, You Know I’m Right: More Prosperity, Less Government.

“I want to be a representative to the people of the Bronx and Queens. She wants to be a national star,” Ms. Caruso-Cabrera told The Washington Times. “If she likes Hollywood, go to Hollywood.”

Ocasio-Cortez tells critics that she has held hundreds of events in her district since being elected in the 2018 midterms when Democrats took over the House.

Caruso-Cabrera, though, argues that the incumbent’s democratic socialist policies don’t line up with the people of the district, composed of parts of the Bronx and Queens, who are upset over the loss of tens of thousands of jobs from the canceled deal with Amazon that the congresswoman helped nix.

Eight Republicans and four other Democrats besides Caruso-Cabrera have announced plans to run against Ocasio-Cortez this year. The filing deadline for the June 23 primary is April 2.

Previous Pelosi Opens ANOTHER Investigation into Trump, this time over COVID-19, Trump Responds
Next Actress Sandra Bullock says ‘Donald Trump Is Doing Everything To Improve Our Nation, If You Don’t Like Him Just…’