President Trump just got some great news as the Supreme Court, with Brett Kavanaugh casting the deciding vote, just ended the liberal 9th circuit court’s reign of terror.
Trump has complained about the runaway court as it has bloked many of Trump’s actions in the executive branch.
The court went along partisan lines and came back with a 5-4 decision and a big victory for Trump.
The 5-4 decision reversed the 9th Circuit Court of Appeals earlier ruling. Thankfully, Trump’s historic win and realignment of the courts is restoring sanity to America.
The Court sided with Trump and ruled that the U.S. government can detain immigrants with past criminal records without bond (for as long as needed) as they await deportation.
The four judges who opposed the ruling did so vehemently which goes to show what was at stake in America with the 2016 election. It is common sense to hold a criminal who is not a citizen, especially one who was violent, in custody before we deport them. Thankfully, America made a wise choice in Trump.
From CNN: The Supreme Court held on Tuesday that the government can detain — without a bond hearing — immigrants with past criminal records, even if years have passed since they were released from criminal custody.
The case centered on whether detention without a bond hearing must occur promptly upon an immigrant’s release from criminal custody or whether it can happen months or even years later when the individual has resettled into society. The statute says simply that the detention can occur “when the alien is released” from custody.
The court voted 5-4 in favor of the government.
In his opinion for the court, Justice Samuel Alito said that the immigrants in the case had argued they were “owed bond hearings” in order to argue for their release. Alito said that the law did not support their argument.
Justice Brett Kavanaugh wrote separately to say that the ruling was based entirely on the language of the statute at hand. He said it would be “odd” to interpret the statute as mandating the detention of certain “non citizens” who posed a serious risk of danger of flight, but “nonetheless” allow them to remain free during their removal proceedings if the executive branch failed “to immediately detain them upon their release from criminal custody.”
“The court correctly holds that the Executive Branch’s detention of the particular non citizens here remained mandatory even though the Executive Branch did not immediately detain them.”
From Reuters:
The court ruled 5-4, with its conservative justices in the majority and its liberal justices dissenting, that federal authorities could pick up such immigrants and place them into indefinite detention anytime, not just immediately after they finish their prison sentences.
The ruling, authored by conservative Justice Samuel Alito, left open the possibility of individual immigrants challenging the 1996 federal law involved in the case, called the Illegal Immigration Reform and Immigrant Responsibility Act, on constitutional grounds – their right to due process – if they are detained long after they have completed their sentences.
The law at issue states that the government can detain convicted immigrants “when the alien is released” from criminal detention. Civil rights lawyers for two groups of plaintiffs argued that the language of the law shows that it applies only immediately after immigrants are released. The Trump administration said the government should have the power to detain such immigrants anytime.
It is not the court’s job, Alito wrote, to impose a time limit for when immigrants can be detained after serving a prison sentence. Alito noted that the court repeatedly has said in the past that “an official’s crucial duties are better carried out late than never.”
Alito said the challengers’ assertion that immigrants had to be detained within 24 hours of ending a prison sentence is “especially hard to swallow.”
In dissent, liberal Justice Stephen Breyer questioned whether the U.S. Congress when it wrote the law “meant to allow the government to apprehend persons years after their release from prison and hold them indefinitely without a bail hearing.” 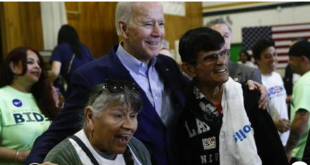